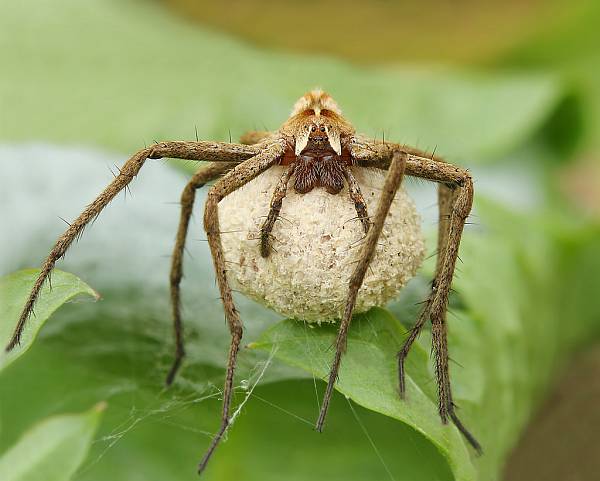 Prior to marriage, men often have to make an effort to convince their beloved. This is also the case with some animals – before they are willing to mate, some female animals demand a gift in the form of a dead prey animal from their admirers. The nursery web spider presents this nuptial gift inside a package of spider silk. Current research revealed that some clever spider males take advantage of this circumstance and wrap inedible objects in silk so as to obtain access to females with little effort. The Danish biologist Maria J. Albo and her colleagues investigated this interesting behaviour and reported on their findings in the scientific journal “BMC Evolutionary Biology”. In their experiments, they caught several young nursery web spiders (Pisaura mirabilis) and raised them in the laboratory. Subsequently, male spiders were given either a fresh fly or inedible objects of the same size such as a cotton ball, an apple blossom or the empty shell of an already eaten fly. The males wrapped each of these objects in silk and presented these gifts to females that were added shortly afterwards. When the females noticed that the male was carrying a gift, they approached it and allowed it to mate. However, the swindlers didn’t profit the same as honest spiders – females that found a worthless object after unwrapping the gift immediately stopped mating. Only the males that packaged fresh, juicy flies were allowed to mate with the females for a long time. Obviously, females attempt to punish cheating males. However, finding and catching an attractive piece of prey requires a lot of diligence and effort – which weak spider males rarely manage to do. If those instead wrap a worthless object, they may be able to exchange at least a little sperm with a female. Similarly, in humans, men often try to entrance women by offering fake objects as for example worthless jewellery – but until the women find out the truth, they may already be pregnant with the cheaters having escaped long ago.