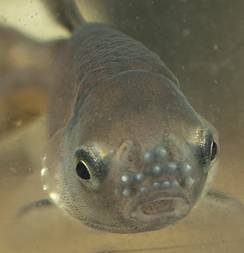 Following one of my last discoveries – that morphological plasticity follows age- and sex-specific patterns in the cichlid Pelvicachromis taeniatus – I was interested in whether the same patterns occur in the fathead minnow Pimephales promelas.

In my newest experiments, I exposed sibling groups of minnows to either alarm cues or a control treatment. Then I photographed individual fish at 18 days (at the end of larval development) and 180 days (at the onset of sexual maturation) age. Afterwards, I performed geometric morphometrics by using the IMP suite.

By using these tools I revealed first that already at the end of their larval development after just 18 days, juvenile minnows exposed to alarm cues had a distinctly deeper body as well as noticeably longer dorsal fin base lengths than did control fish. At 180 days age, we were able to observe a sex-specific response with only male but not female minnows responding morphologically to the presence of alarm cues. Males developed a deeper body shape as well as larger eyes. Females showed no morphological response at all. Interestingly, when we pooled results from both males and females, the effect of alarm cue exposure on fish morphology was still pronounced. This suggests first that the results from juvenile fish may be driven by a male-specific response as well. Second, the results from many previous studies on fish morphology where sexes had been pooled should be questioned – it may have been a strong sex-specific response in many of these cases as well. Nevertheless, most of these results match the outcome of our previous study, confirming our assumption that the observed age- and sex- specific patterns in morphology are likely to be a general pattern and not just an observation that is restricted to a single species.

This study has just been published in the open-access journal Scientific Reports. It is the third published study that has arisen from my stay at the University of Saskatchewan, Canada.