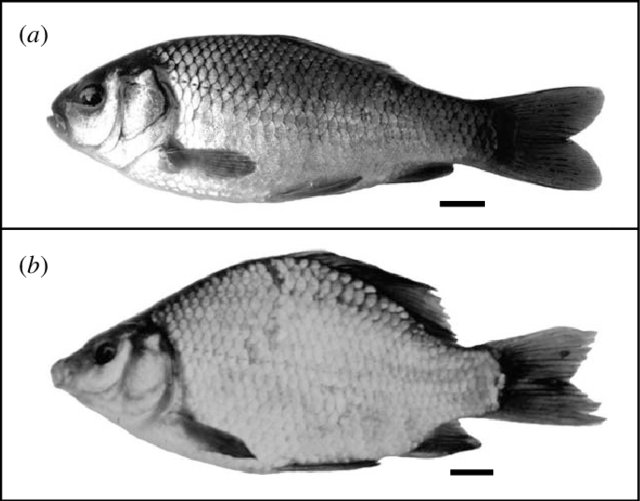 Organisms can adapt their body to their environment within a single generation. This ability is called morphological plasticity (from old greek morphé „shape“ and lógos „study“ = „study of shape“). Examples for this ability in humans would be muscle development after exercise or getting a tan after sunbathing (melanin production).

Scientists have long assumed that the degree of this plasticity is something that remains constant across individual development and between sexes. However, new theories have recently been developed: following what would be optimal in nature, the degree of plasticity should be different at different developmental stages and dependent on the environment, either males or females should be able to change their morphology to a greater extent. As to date, no empirical research addressing this question existed, I used the slender krib (Pelvicachromis taeniatus) to test these assumptions in the context of morphological changes induced by alarm cues.

Alarm cues are passively released from injured fish and warn conspecifics about the presence of predators. The presence of alarm cues does not only lead to behavioral changes but in the long-term also modifies fish morphology. In the presence of alarm cues, the crucian carp (Carassisus carassius, Fig. a) develops a markedly different body shape characterized by a distinct increase in body depth (Fig. b). This makes it much more difficult for predators to handle and feed on such “defended” fish. Consequently, crucian carp with deep bodies have a lower risk to get eaten.

In my experiments, I exposed siblings of Pelvicachromis taeniatus from hatching onwards to either alarm cues or a control treatment, a treatment that was continued for their whole life in order to simulate the permanent presence of predators. Then, by taking photographs at pre-defined ages, I tracked fish body shape as well as fish color patterns at six developmental stages. Three of them were juvenile fish, the other three stages adults.

We found that alarm cue-exposed Pelvicachromis taeniatus altered both their body shape as well as their color pattern development. However, these changes were observable at only two developmental stages. First, they appeared at an early juvenile stage, only two weeks after hatching. Afterwards, these modifications disappeared, only to re-appear at the onset of sexual maturation and disappear again afterwards. This pattern matches the previously mentioned theoretical assumptions and thereby confirms the corresponding theories. Surprisingly, we also observed that only male fish altered their body whereas females did not. This may be because male Pelvicachromis taeniatus are larger than females and have to defend their territory from other animals. The most important morphological changes were accelerated growth in alarm cue-exposed juveniles and males as well as a paler color in males. A larger body makes it – similar to a deeper body – more difficult for predators to handle these fish. At the same time, the pale color makes the fish less conspicuous, which makes them more difficult to find to predators.

These results were published in the renowned journal The American Naturalist. Lay summaries of the article can be found in a press release of the same journal as well as in a press release of the University of Bonn. Moreover, this paper has been mentioned as an example for the excellence of research in Germany according to the German Federal Ministry of Education and Research .

Photo: © Christer Brönmark/Proceedings of the Royal Society B